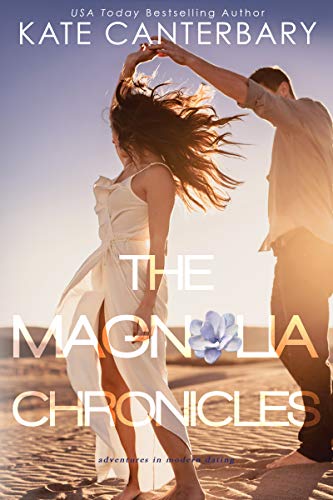 5 of 5 funny and relatable stars

I can tell how good a book is by how many times I use the highlight feature on my Kindle. For this book, I highlighted 32 passages. 32! I think it’s probably a record! And these were just the passages that resonated with me. If I also highlighted all the times that this book made me laugh out loud, that number would be much higher.

I’ve only read a few of Kate Canterbary’s books, and I’ve enjoyed them all, but I think this is my favorite so far. It was originally released in her newsletter as a serial, but I have zero patience, so I waited until it was released as an entire book before I read it. I am currently in the same boat as Magnolia was at the beginning of the book: trying to find a good man. As she says at one point, “It shouldn’t be this difficult.” And yet, it is! Every woman (and man) has their dating horror stories, and many of Magnolia’s made me laugh out loud, and others made me cringe while also being grateful I haven’t had to deal with the men she that had!

Of course, the story delves a bit into the fantasy realm, when she finds not one, but TWO good men to date, and they are are ok with her dating both of them at the same time. (But I guess that’s why we read, to escape reality! 🙂 ) I don’t hold this against her, though, because given the opportunity, I’m sure I’d do the same thing!

The book is so cleverly written (many chapters begin with the words “my date was…” ), and so funny, (“The weekend rolled around but I forgot all about baking. It was probably a blessing in disguise since my sweet breads only rose about half of the time. That seemed like a fair statement on my ability to function as an adult too: fifty percent meeting expectations, fifty percent blobbing around like thick, doughy uselessness.”) and so relatable (“dating was draining my soul.”)

I also enjoy that her books are based in Boston, unlike so many stories that take place in New York. Don’t get me wrong, I love NYC, but the change in venue is refreshing. There’s just something so fun about a woman who has a tiny dog named Gronk! I’ve read some other reviews, and one problem some readers had with it is the lack of actual sexy times, which KC is VERY good at writing. I don’t think this book suffered from their omission, but I was surprised by it.

I am looking forward to reading it again, and I’ve also been inspired to read the rest of the Walsh series. (I’ve only read the first one, Underneath It All, and part of the second, The Space Between, as well as a separate standalone, Coastal Elite, which is actually the KC book that started it all for me!)