How long would you wait for love? 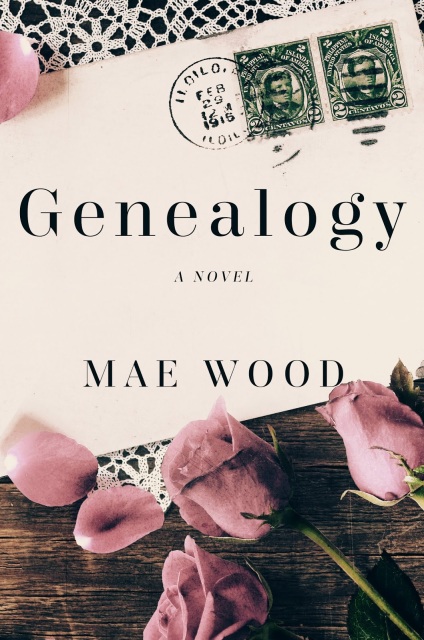 My great-grandmother’s name is bold across the cream envelope, now golden at the seams with age. I can’t remember the last time I’ve seen graceful, purposeful handwriting with a fountain pen and not the hasty scrawl of ballpoint.

“Letters to Great-grandma Alice,” I say with wonder, tracing my fingers over the faded postmark and foreign stamps.

I turn the thick envelope in my palm, slide out the tightly folded pages, and unfold the thin paper, taking care not to tear the letters that were important enough to keep for a century.

“Great-grandpa was in the Philippines?” I ask.

“Oh no. Not your great-grandfather,” answers Grammie, her eyes twinkling with her mother’s secrets. “Elliott.”

At thirty-three and with her future unclear, Ali Waller finds her way home again. A box of long-forgotten love letters written to her great-grandmother holds the unlikely key to Ali finding her new path.

As she tracks down the letter writer and his descendants, Ali learns the magic of love, hope, and resilience.

Told by three characters, and across century and an ocean, Genealogy is an enchanting story about love and loss, taking chances, and embracing the surprises that life brings.

She didn’t want to move, and I didn’t want her to move either. But we were doing it, together. Sifting and sorting. Shredding and donating. Culling a lifetime into piles to be packed and placed into boxes. The lucky things would end up in my grandmother’s new six-hundred-twenty-three square foot assisted-living apartment. The not-so-lucky would end up on a curb.

“These linens,” she said, pointing to the bottom drawer of the sideboard in her formal dining room. “You need them.”

“Grammie, I don’t even have a dining room table,” I said, trucking along in our project to conquer the contents of at least one room this weekend.

“You had one before and you’ll have one again. And these are Irish linen.”

I thought of my tiny kitchen table, covered in discarded mail and unread magazines, not draped in substantial creamy white. She knew I didn’t have the space. I made space for the vintage black satin peep-toe pumps of hers from the fifties and had placed those in the “Ali” pile with a smile, but linens were a different story. The tablecloths were huge. For a table big enough to seat a dozen guests.

“They were Alice’s,” she said.

The trump card played, I bent and pulled them from the low drawer. I was Alice’s namesake, but I’d always gone by Ali because Alice felt formal and traditional, two words that didn’t fit me. She was the great-grandmother who I’d never met, who died a decade before I was born, but whose existence was never far from my mind. “Ali. A-L-I,” I’d explained a million times over my life. “It’s short for Alice. I’m named for my great-grandmother.”

“Well, one good thing is that your monograms match.”

I fingered the tiny beverage napkins, trimmed in hand-tatted lace and embroidered with ALW.

ALW—I smiled. Alice Lenore Wertheimer. Alice Lenora Waller. I was flirting with becoming Alice Waller Sayer, but I was solidly myself at the moment.

“Did she embroider these?” I asked, the old fabric stiff and smooth to the touch.

“I don’t know. I don’t remember my mother doing any needlework, but I suppose all women did back then.”

“True,” I said, flattening out the material with my palm and tugging out a crease. I dragged yet another plastic bin over and began piling the linens in, amazed that they had survived the years.

“The story on one of those tablecloths is that it was a wedding present from some member of the Denny family.”

Ah, an old Seattle story. I knew it wasn’t going to be long before I got one. My ancestors were early settlers of the city and my grandmother carried the banner of native Seattleite proudly, looking down her pioneer nose at the Microsofties and the Californians who had invaded her precious land. And though she’d moved to Kansas City with my grandfather nearly fifty years ago, the city was in her DNA.

I half-listened to her prattle on about some trip to Japan to obtain plants and animals for the Woodland Park Zoo as I examined the linens and placed them in the plastic storage tub.

“Okay,” I said, looking around the room, the sideboard now empty. Something accomplished today, and it made me feel good to have one of the many small tasks that it would take to empty this big house done. I looked at my watch. “I have to leave at three to head back to the hospital, so what can we get done in an hour?”

“One drawer to go,” she said from the dining chair where she’d settled in while I’d knelt in front of the sideboard. “The bottom one.”

Her words made my chest ache but also soothed them. I hated that she was getting confused more often. It reminded me that one day Grammie would be gone, but it also convinced me that we were making the right decision to move her. No more worry about her alone in this big house.

“All done,” I said, pointing to my tub of linens.

“The bottom-bottom one, Ali. The apron is a drawer.”

“I didn’t know that,” I said, feeling sheepish that I’d thought she had been confused. “A secret drawer?”

“That’s the point,” she said. The sideboard had been in this house my entire life and I’d never known that. I tilted my head to look at the piece, not quite believing her. “It’s where your grandpa kept his favorite pistol.”

“Still there?” I said with a smile, reaching down under the lip of the cabinet.

“Well, maybe. It’s been a long time since I dug around in that thing.”

“I’m going to change your name to Mrs. Basil E. Frankweiler,” I said, giving the concealed drawer a tug. It didn’t budge. Maybe she was confused after all. “Or Mrs. Piggle-Wiggle. But only if we find a Degas or pirate gold.”

“It was a statue of an angel. Leonardo da Vinci,” she corrected me. In and out. Touch and go. Here and there. I was never sure where a conversation would lead us, and based upon the swelling in her extremities, I wasn’t sure today was going to be a good day for coherent conversation. It wasn’t her head so much as her heart that was slowly killing her by refusing to pump. She needed access to round the clock medical care now, not just sitters and family at the house, and we were making that happen although no one was happy about it.

“Oh, that’s right,” I replied, the memories flooding back of the story of a headstrong girl and her younger brother running away to the Met. “What I really remember about that book was them taking a bath in the fountain.” My grandmother and I were very close. The afternoons of my childhood had been spent at her house with my brother and sister. And while my parents were at work, Grammie showered us with troves of books. She was a children’s librarian. Or she had been until she’d gotten married. Because, as she’d explained a million times to me over the years, in those days nice women didn’t work outside the home after they were married, and so she’d retreated to a life of children and tennis and dinner parties.

I gave the drawer another tug and it budged a few inches, but it didn’t slide open.

“Oh, and the sideboard is yours too. No argument. It was—”

“Alice’s?” I guessed as I wiggled the drawer open to find not pieces of eight or a sketch of a ballerina, but more table linens.

“No, her mother’s. You’ll be the fifth generation of women in our family to own it.”

I looked at the dark, heavy Victorian behemoth with new eyes, knowing it was going home with me. And knowing I had nowhere in my tiny, Ikea-furnished apartment to put it, but I spoke the truth: “Thank you. I’ll be a good caretaker.”

I looked down at the linens, focusing on the task rather than the meaning of the work I was doing, filling the plastic bin with more ancient fabric than I’d ever begin to use. Under the last tablecloth, I found a small, flat box. The pistol? I recognized the foil-stamped logo. Frederick & Nelson, the grand Seattle department store that now only existed on Grammie’s bad days when she’d ask me or someone else to take her there for lunch.

“Grandpa’s gun?” I asked, setting the box into my lap as I sat on the floor. I lifted the lid. “Papers,” I said, a little weary at the prospect of spending the last bit of time before I had to leave focused on her reading each paper carefully before deciding whether she could part with it.

My grandmother was a pack rat. I’d recently dropped off two decades of yellow-spined National Geographics at the recycling center and her garage was still stuffed to the gills with boxes of papers. I’d had visions of a huge bonfire while she was at a doctor’s appointment just to speed up the process.

The box resting in my cross-legged lap, I riffled through the contents. “Letters,” I said, pulling one out. At least it wasn’t receipts from the nineteen sixties, though the hospital bill from my mom’s appendicitis at age eight had been a gem. The total bill was a few hundred dollars and Mom had spent three days in a children’s ward. Most of my patients were sent home by the end of the day with a bill in the thousands.

The cream envelope was golden at the seams, the clean, cursive writing enchanting. I couldn’t remember the last time I’d seen graceful, purposeful handwriting with a fountain pen and not just a hasty scrawl of ballpoint on a scratch pad. 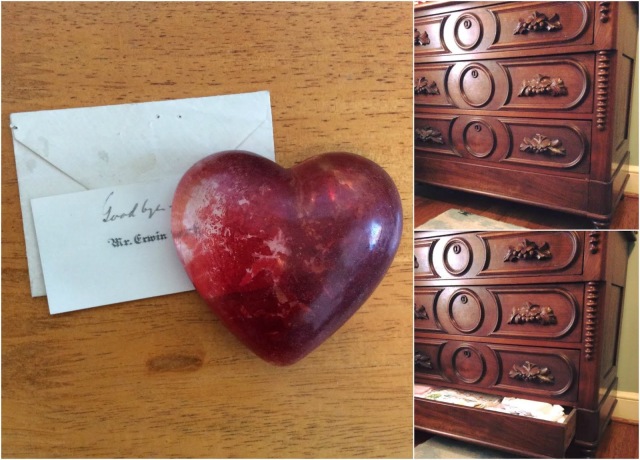 Win everything you need to snuggle up with a good read!

Professional sassypants and novelist, Mae Wood has been a bookworm her entire life.

She loves cheeses, complicated crafts that she’ll start but never complete, and puns.

A while ago Mae decided that she needed to give up the fear that she couldn’t write “great literature” and write what she wants to read.

And she wants romance. And laughter. And real life.

Mae is married, and has two darling children and an old dog who naps at her feet while she writes.

1 thought on “Genealogy by Mae Wood”